This year we were gladly official part of 49th Hof International Film Festival and hosted some parts of the retrospective with Christopher Petit.

On the ground floor we did three installations. On a window there were projected experimental films Assylum and Radio on Remix, on TVs the installation Marine Court and we had the film-installation "Flying down to Rio" realized in a cube with surround view and sound.

Upstairs it could be found our own videoclip-gallery-project "90 seconds/masterpiece" and in one room it was played the audio arrangements from Christopher Petit "London Orbital Soundtrack" and "Oberhausen 2014 Playback-File".

In addition we two short premieres: on Wednesday we had the short-film premiere of "Der Mogul" from Lena Oelschlegel, Linus Joos and their team and afterwards short-experimental-film "Die Rede des Präsidenten" from Justus K. F. Haufe and Louisa Diedrichs.

Another premiere for us was on Thursday, drummer Oli Rubow and guitar-player Peter Wölpl played live with their project (W).

For all the pleasure you visitors gave us we want to give a big thank you to all of you.

But for realization of this project our special thanks to to all our helpers: Thank you Daniel, Bianca, Nadine, Stefan, Roland, Sandra, Robert, Sepp, Volker, Iram, Eva, Reli, Lukas, Mimi, Max, Stefan, Maria, Nina, Tanja, Jasmin, Diana and Manuel, as well thanks to our families and their friends.

Further more thank you to our other supporters: 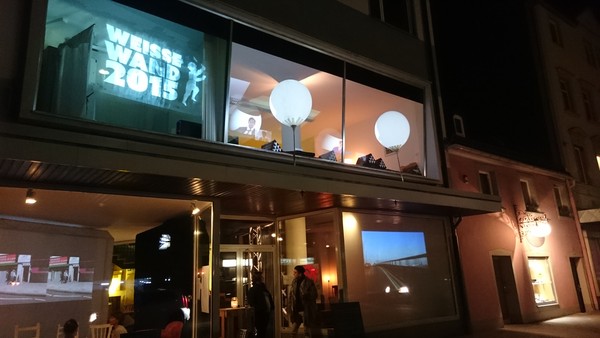